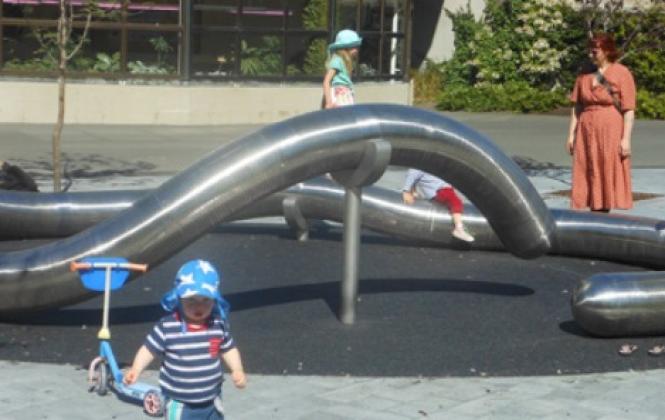 A giant glowing worm has appeared above ground at the Dunedin Botanic Garden. The flexible worm was manufactured by Stainless Design and made possible by laser cutting an intricate pattern to form a solid piece of pipe. It was transported to Dunedin in two pieces and then assembled onsite at the gardens.

The $85,000 worm was designed by Christchurch artist Julia Morison and commissioned by the Dunedin City Council using funds bequeathed to the garden to celebrate the 150th anniversary. Morison chose a worm because of “the mythological symbolism of Ouroboros, a worm-like creature, usually shown as a snake, which eats its own tail. It symbolises constant recreation and for the more down-to-earth reason that worms were the workers in a garden.”

The project was well suited to Stainless Design’s advanced technology, design expertise and manufacturing experience. The challenging project was described as a “geometrical minefield” because of the way that the interlocking pieces had to work together. The end result is a stunning piece of artwork that has already become a feature at the Dunedin Botanical Gardens.

Visiting children and their parents wasted no time in giving “the worm” their seal of approval. Gardens Team Leader Alan Matchett said ''Straight away, there were people all over it and walking around it. It's pretty impressive and it fits in the area really well.''